Reportage of an interfaith wedding in India (she a Hindu, he a Sikh)

He looks tremendous, with his turban, beard and twinkling black eyes. And then that sword he carries. The association with a Danish cartoon is easily made. Yet there isn’t a spark of evil on his mind, certainly not today, on his wedding day – hence of course his twinkling gaze. Jaidev Singh Anand (28) is about to marry Anuradha Suvarna (28). He is a Sikh and she is a Hindu. And although this is India: this isn’t (no way!) an arranged marriage – they know each other from the school benches and have been a couple for years. And today they ratify their love in a ‘joyous ceremony’ in a Sikh temple in Mumbai.

A mixed marriage. For this couple and their family it isn’t a problem: Anuradha’s parents already married outside their castes and Sikhs (in practice at least the men) are traditionally allowed to marry outsiders. Besides: we are here in the city of Mumbai, where all religions meet and where the middle class nowadays is buzzing with international ambitions and ideals. Anuradha for instance studied psychology in London and works as an manager in a project for better education for girls, in the battle against child marriage. And Jaidev works in health systems research in an NGO, with previously jobs in Germany, Hungary and Bangladesh.

Their relation is neither a politically touchy item. The memory of the pogroms on Sikhs after Indira Gandhi was killed in 1984 by her Sikh bodyguards, doesn’t hamper love. The present Hindu nationalism turns for now against ‘foreign’ religions as Islam and Christianity – so thinks many Indian 70 years after the assassination of Mahatma Gandhi that he was a good man, but that he’d better chucked all Muslims out of the country in 1947. But there are no objections against the role of India as the spiritual homeland for also the Sikhs; Afghan Sikhs e.g. on the run from IS attacks, may count on a permanent residence permit.

The saying is: with two faiths on one pillow, there the devil sleeps in between. It doesn’t keep this couple awake. They are officially or Hindu and Sikh, but practicing? No. Still, Jaidev will never leave his house without a turban or a beanie, out of respect for the illustrious history and culture of his ancestors and theirs illustrious history of resistance against the Islamic Mogul-tyranny. His own philosophical interest lies more in Sufism, which also has heavily influenced Sikhism.

Then why did they choose for a Sikh wedding? ‘Especially for my mother,’ explains Jaidev. ‘She is very religious and to her it means very much. In addition, my father died four months ago completely unexpected’. So the couple decided to give her a unforgettable day of joy she will always remember.

So Anuradha’s family and friends gather in the morning of the big day in the Gurdwara, the Sikh temple. The large lobby hangs full of yellow and orange flower garlands and there are a lot of boys around who provide all uncovered men with a turban: in a jiffy they change a long golden coloured length into a festive headwear with a merry topping, because no man is allowed to enter the prayer hall without covering his head. And then, with pounding drums, the party of the groom arrives, grandmother in front. In the groom’s hands an antique-looking sword, that later on will play a role in the ceremony. Definitely a family heirloom? ‘ No,’ he smiles, ‘I borrowed it from our neighbour.’ 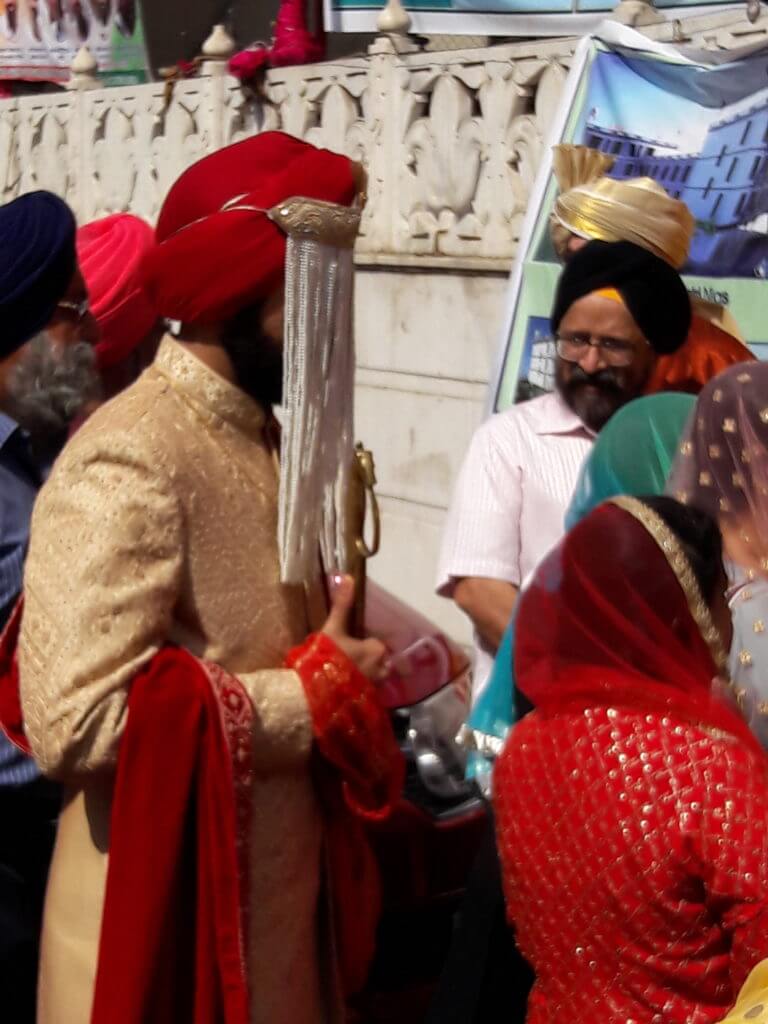 Surprising detail: otherwise than in Europe here the man hides his face behind a little curtain. It turns out to be a custom from the days that a warrior-groom was still sometimes out in a battle shortly before his wedding and he was forced to let a (veiled) brother or friend to perform as a stand-in the last engagement rituals – a bit like you could marry in Europe ‘with the glove’.

Inside the temple Jaidev will take off his veil, but first he has to appear at the gate in front of Anuradha’s closest relatives. His brother-in-law-to -be (a good friend of his) looks particularly serious, because for him it is a religious away game and the future of his only sister is at stake. But fortunately, Jaidev is approved and may come inside, where Anuradha is waiting for him. 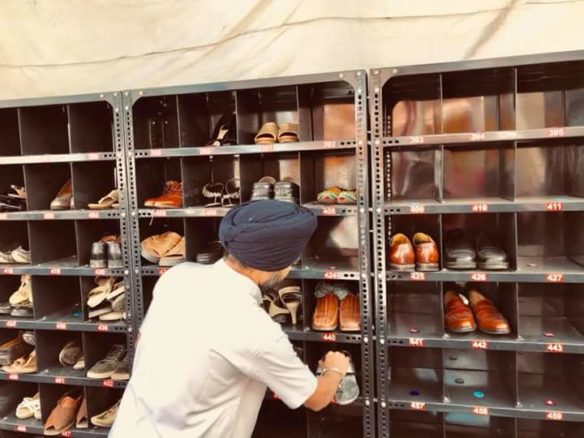 Then the whole company of almost five hundred guests is guided to the prayer hall above; please take off your shoes and socks, and also wash your hands and feet first. Above also the women have to cover their hair, if necessary with a handkerchief.
The hall is sober: there are no pictures or statues, so all attention can focus on the ‘Guru Granth Sahib’, the Holy Book of the Sikhs, that lies at the front of the hall under a golden canopy on a throne. Next to it musicians play on little drums and accordions. Everybody sits on the floor: women left, men right. Bride and groom sit all in front, ready for ’the joyous ceremony’, the marriage ceremony of the Sikhs.

And in it quite a lot happens for your eyes to set on. Like how the groom and bride walk four times under hymn singing around the altar, while Anuradha holds the red sash that is winded around Jaidev’s sword. And after each scripture reading the predecessor wraps the Holy Book back carefully into the preciously decorated cloths; he also pays a number of times his respect to the shrine with a hairy fan. At the end, everybody gets a bit of sweet pudding, which is just prepared next to the altar. And then Anuradha and Jaidev are official, also for the Indian law, but most of all for each other, joined together to ‘one single soul in two bodies.‘

Sikhism was founded around 1500 in Punjab, in the North of India. It is committed to the ultimate spiritual fusion of a human being with the one and only Almighty God, who lives in everyone, regardless religion, race, rank, or gender. Otherwise than Hinduism, Sikhism is strictly monotheistic and idolless; it recognizes no castes and rejects many Hindu rituals as superstition. It also differs clearly from Islam: From the very beginning, men and women have the same rights in marriage or worship, so also women can conduct the service, although in practice is doesn’t happen very often.

A good Sikh worships God, earns a living with honest and hard work, founds a family, doesn’t try to convert outsiders and has a serving attitude. This shows, for example, from the custom that everybody (also non-Sikhs) is always welcome for a free (vegetarian) meal at the temple, which explains the presence of often huge kitchens and dining halls.

Sikh men can be recognized especially to their beard and turban, under which they hide their long hair; Sikh women wear in public their hair public often loose. Most Sikhs refuse to shave or cut their hair, since God created the human being with hair growth (nail clipping however is allowed). But there is also growing number of Sikh men who shave their heads or – like Jaidev – trim their beard regularly, although he was asked not to do so in the final weeks before the wedding ceremony in the Gurdwara.

Facial veils for women are explicitly prohibited. Outside of India there is a growing number of young women who decide to wear also a turban, although they aren’t obliged to do so. When baptised, Sikh women add ‘Kaur’ (princess) to their name, the men become then ‘ Singh ‘ (Lion), if this isn’t already in their family name.

Striking development: whereas in India interfaith weddings in a Gurdwara are common, in specifically the British diaspora some orthodox young Sikhs find you only may walk four times around the holy book if you’re both Sikh – ‘mixed’ weddings may be allowed, but not through the ‘joyous ceremony’ in the Gurdwara.

A pious Sikh prays and meditates several times a day, is a vegetarian, doesn’t smoke and doesn’t drink any alcohol. The precepts for baptized Sikhs are strict, which may explain why Sikhs are often only later in life, after their retirement, be baptized. Anyway, on the exuberant wedding party Jaidev’s family offered that night after the ceremony, there was no skimp on meat and drinks.

A required attribute for baptized Sikhs is the ‘ kirpan ‘, a curved dagger that symbolizes the willingness to fight injustice. Sikhs are renowned warriors; the British loved to have them in their armies. In the second world war, they fought against the Germans in the Dutch cities Maastricht and Eindhoven; in Indonesia they liberated several Japanese prisoners camps and during the turbulent ‘bersiap’-time they protected Dutch civilians from furious Indonesians.

Sikhs in the Netherlands

There are about 15,000 Sikhs in Netherlands, who arrived from India, Pakistan and Afghanistan since the ‘60’s , looking for work or on the run from the Soviets, the Taliban or vengeful supporters of the Indian Prime Minister Indira Gandhi, who was killed by two of her Sikh bodyguards. Sikhs work often in the textile and jewellery trade or as IT-staff at multinationals. There are eight Gurdwara’s in the Netherlands, all in the western region.

Lately some pious Sikhs move on to Britain or Canada, where they are allowed to wear a turban in public service, where they are less often taken for Muslims en where, they hope, their children will be bullied less.